We have recently moved into a new house. Quite a few time now this hammering sound starts up. Ive listened to a water hammer on YouTube and it sounds like that. We have located where the sound is coming from (under the floor, upstairs, close to a radiator). There doesn't seem to be anything that starts it, just seems to happen randomly. When I stand on that part I can feel the ground vibrating. When I turn the cold water taps on nothing happens, but if I turn the hot water taps on the noise temporarily stops until I turn the taps off and it usually starts up again. I tried turning the heat off on the radiator it's near but that doesn't seem to have made a difference. Turning our boiler off seems to be the only thing that is sure to stop it for good. After a Google I've tried turning the water off at the stopcock and then running the system dry, but the noise has happened since then. Any advice would be really helpful, is there anything else I should try or do I need to get a plumber in? This is the first house we've owned so not very experienced with things like this. Thanks in advance

Your builder
1 Reviews, 100% Positive
It will be good to have all heating system cleaned/drained and filled back again for test.
Better to get plumber to help you with it
22nd Apr 2021
Helpful Answer? Vote Up

+ 28
Post your job & get responses from local plumbers. Read reviews before you decide to hire.
IB Plumbing
1 Reviews, 100% Positive
Many of us have experienced banging pipes when a tap is turned off. This is usually caused by a mains pressure system which is at high pressure. The most common causes are:

Loose Pipes
If pipes are not secured correctly, then even the mildest shockwave can create loud bangs. Pipes must be fixed securely to a sturdy surface every couple of metres. Be aware that you may have hidden pipes that run under the floor or woodwork. Make sure to check for any loose straps, bolts or joists. The most common areas to find loose pipes are in the cellar or in an airing cupboard. Building work may also loosen water supply pipes increasing the effects of water hammer.

New Kitchen Appliances
If the banging started after installing a new washing machine or dishwasher, then it’s likely a problem with the solenoid valves. Dishwashers and washing machines have a water supply that is controlled by solenoid valves. These are electrically operated and they stop the flow of water immediately. When this happens, the water reflects back up the pipe and creates a shock wave that causes the bang.

Worn Stop Valves
The hammering may also be caused by worn stop valves. Stop valves can cause water hammer if they have loose gland packing and/or worn washers. The valves will generally be open when the water hammer shock wave travels through the pipework and the shockwave could well 'rattle' the valve handle and a loose jumper.

Clogged Air Chambers
If you’ve never had water hammer and one day you suddenly experience it out of the blue, then it’s likely your water system’s air chambers are blocked. These chambers often become blocked with water or residue from minerals found in water. The blockage will stop the chamber from absorbing the pressure in your system and, as a result, you will hear an occasional bang.

Water Ripples from the Tank
Another cause of hammering pipes is water ripples created by a float valve inside your water tank. When water flows into the tank, the valve float rocks up and down, constantly closing and opening the valve. This creates a “wave system” that echoes along the pipes, causing the hammering sound. Plastic water tanks can flex considerably, so they should have a reinforcing plate (metal) to stop them moving.

Fast-acting valves
A common cause of water hammer can be fast-acting valves on appliances such as washing machines or dishwashers. These valves suddenly stop the water that is moving along the pipes. A shockwave results and this causes the pipes to shudder, causing the banging. The banging gets worse as the valves are worn.

How to Stop Water Hammer
Water hammer isn’t just irritating - it can also go on to damage different components of your plumbing and pumping systems. That’s why it’s important to get rid of water hammer as soon as possible. A loose pipe or worn stop value could end up costing you thousands of pounds.

+ 24
Davis plumbing
1 Reviews, 100% Positive
Hi, sounds like it could be the pipes expanding and contracting when they warm up. The best fix for this would be to get access to the pipes and put some lagging/insulation around the pipe where-ever it touches another pipe or joist.
4th May 2021
Helpful Answer? Vote Up

+ 20
Post your job & get responses from local plumbers. Read reviews before you decide to hire.
Ask your own question 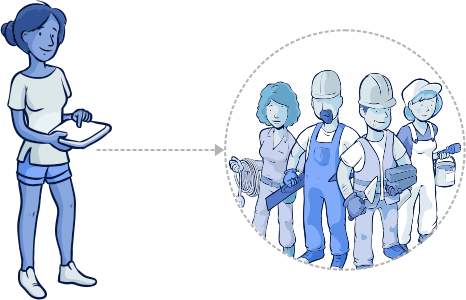